Liverpool businessmen have called the ECHO to offer interviews in response to plea for work.

Kind-hearted Liverpool people have come forward to help a homeless man whose desperate plea for work is going viral on social media.

Earlier this evening, the handwritten CV of a man, believed to be called Jordan Lockett, was tweeted by Twitter user @AaronTDCC who met the 20-year-old homeless man around the Heathfield Street area of Liverpool city centre.

After the ECHO shared the story of the Merseyside man’s quest to help the homeless youngster, several Liverpool businessmen and came forward to offer their support to give the lad the break he might need. 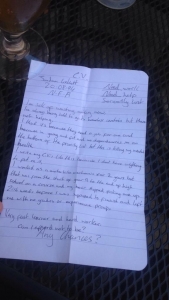 Lee said: “My wife saw the story on social media and it touched a chord in both of us.

“I’m interested in meeting him to see if he would be suitable. We can teach him cooking, life and social skills. If he needs an advance on his wages we can sort that so long as he is enthusiastic and committed.”

“I am sick of wasting away now. I am always being told to go to homeless centres but they’re not helping.”

Alliance Couriers – a 10,000-fleet courier service later tweeted: “We would be happy to offer him a job if you make contact.”

Liverpool man Frank Johnson who runs claims management company, Claims 4 You, in Knowsley, said he would give the youngster a start in their office.

He told the ECHO: “Everyone deserves an opportunity – this might be just the break he needs.”

Mayor of Liverpool, Joe Anderson, also tweeted: “If you know where this young man is or know how we can contact him please contact me.”

Now, we need your help to contact Jordan and let him know the overwhelming support from the people of Liverpool.