Liverpool jobseeker Ben Small is considering offers from three potential employers after a heartwarming Twitter #givebenajob campaign to find him a job.

An appeal on behalf of Ben, from Kensington, has reached thousands of people across the world after it was launched by his stepmum Fiona Hodge using the hashtag #GiveBenAJob

Ben, 26, who has Down’s Syndrome, has struggled to find a paid job despite having an NVQ in catering and completing work experience with big chains.

His dad Mike said he had now narrowed down his search to three firms – Costa Coffee at the Royal Liverpool Hospital, family-run Wilson’s Kitchen in Old Swan and a school for young people with autism.

He said: “These three look quite promising and Fiona has sent off Ben’s CV to them. We’re really pleased.

“Obviously at the end of the day it’s Ben’s choice but at least he has a hell of a lot more options than he did before this. 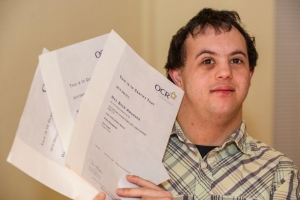 “We are keeping our fingers crossed that he will have a job within the next few weeks. Ben is a good worker. He just gets on with it and he enjoys it.

“A job is what he wants – to him being grown up is all about going out to work.”

She wrote: “Won’t someone in the Liverpool area give my step son, Ben, who has Down’s Syndrome a chance at a paid job? Motivated with NVQ 2 in catering”

Wilsons Kitchen responded by saying: “we are a small family run liverpool cafe &amp; we would love to #GiveBenAJob”

Mike said he, Fiona and Ben’s mum Doreen had been stunned by the success of the campaign.

He said: “After Ben was in the ECHO Good Morning Britain have been in touch and they were talking about him in Seattle in America. Apparently it’s even gone to Indonesia, Hong Kong and Thailand.

“It just started off as an off the cuff comment from Fiona about putting it on Twitter and it’s really taken off. It’s been absolutely mad. Of a night we just sit there looking at each other saying “My God!”

“Ben is lapping it up – I think he thinks he’s a WWE wrestler with all the photos and people ringing him!”